The Shed is a stand-alone open access workshop established by the School of Computing to provide space for students to work on practical projects. Its resources include: CAD, CAM, turning, 3D printing, electronic PCB design, laser cutting and mold making.

Students and staff of the School can use The Shed not only to build physical devices within taught modules, such as Internet of Things; but also to support and develop their own personal interests and hobbies. A key rationale for creating the space was to expose students to real-world data, which they often struggle to foresee when designing computer programmes in the classroom. The Shed’s activities support new kinds of innovative teaching and learning by taking advantage of the increasing accessibility of electronics and engineering with a rapid prototyping capability. Students are not charged for using the machines or the materials.

Members of the public can access The Shed’s resources through Associate Membership of Tinkersoc (a student-led maker society).

You can see what we are up to by following us on Facebook. And you can see a slideshow of The Shed being built here. 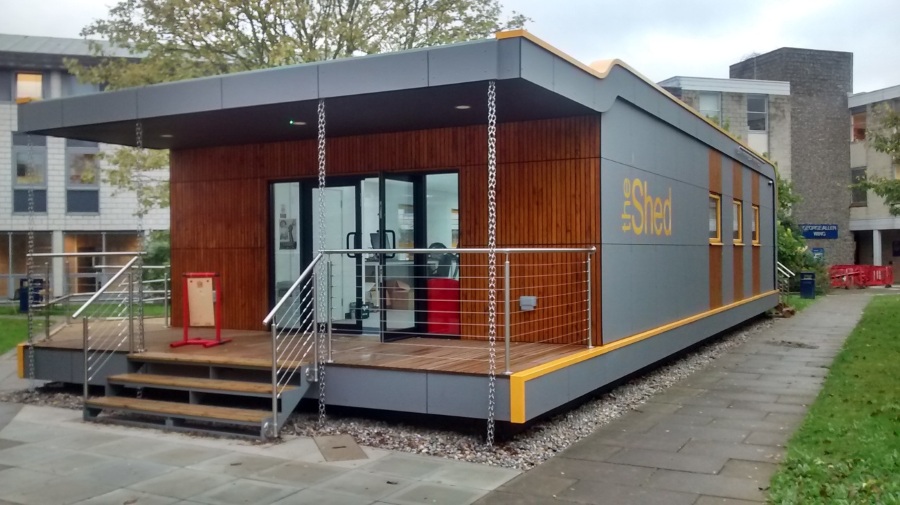 What do we mean by making?

In the last decade, there has been a transformation in the ease with which complex, interactive objects combining software and hardware can be made. A constellation of overlapping technologies and ways of working have come together to make this happen:

Alongside this, large numbers of freely available open datasets, so that ideas can be tested rapidly against real-world data.
These technologies facilitate a way of working that is about rapidly making prototypes. This, in turn, enables ways of learning and collaboration that are based on interacting around a developing prototype. Such ways of working have shown themselves to be particularly productive in collaborations between technologists and people from a wide variety of other backgrounds: musicians, theatre makers, games designers, journalists, politicians, civil servants, as well as scientists and engineers.

What is in the space?

The space consists of a large open-plan workshop area. At one end of the workshop are large, fixed pieces of equipment: 3D printer's, laser cutter, metal fabrication, etc. In the middle are a number of movable workbenches where people can work on projects. At the other end there is an open area for demonstrations, exhibitions etc., opening out onto a terrace.

How is the space being used?

Primarily the space is being used for informal learning and teaching within the School of Computing. A new academic module called "The Internet of Things" is available as an option for third year students. It makes use of a large quantity of ARM based development boards and sensors available from The Shed. We also embed a number of final year undergraduate and masters projects in the space; such as Autonomous Drone based projects and sensor networks. It is also being used by other University groups, primarily TinkerSoc, for their community activities.

In the longer run we hope to run a number of events for the wider university community, collaborative events with outside organisations, and events for the public.